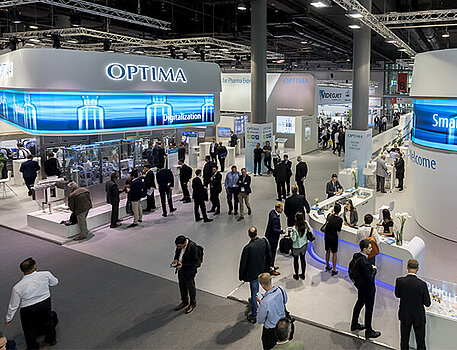 TRADE SHOWS around the globe

Paris, Chicago, New York, Shenzhen, Sao Paulo, Las Vegas, Geneva, Düsseldorf. These are just some of the stops on Optima’s itinerary during a typical trade show year. It goes without saying that anyone serving global markets should be represented worldwide.

They are called Interpack or Achema, Pack Expo, Index or K Show. Their turf is the major economic metropolises of the world, and they all have one thing in common – when you take a look at the exhibitor list, you will usually find one of the many Optima Group divisions among them.

No surprise, since trade shows for the packaging and filling industry, mechanical engineering, or the process industry provide ideal opportunities to cultivate precisely what is dear to Optima's heart in one place: close partnership and interaction with customers all over the world.

Whether in Frankfurt am Main or on the other side of the world, every trade show requires top performance in terms of planning, preparation, and logistics.

Employees from Schwäbisch Hall and across the globe are involved in the organization of trade shows. Machines up to 33 feet long travel by ship, freight carrier or airplane for large events. All of this needs to be planned a year in advance. Nevertheless, unpredictable issues happen time and again at critical moments. For example, a machine gets stuck at customs, the air-conditioning breaks down onsite, or trade show construction components need to be modified. This calls for improvisational and organizational skills.

It can be tense when huge machinery has to be steered through narrow trade show aisles using large forklifts. The team onsite holds its breath and the marketing team at headquarters feverishly waits until the machine is safely in place.

However, by the time the doors open for the first time, the stress and tension of the last few days fades away. Now the anticipation of interesting encounters captures the team’s thoughts.

A ritual that is repeated up to 90 times each year. That is how many trade shows – both large and small – Optima participated in during 2019. A little more than 60 years ago, such numbers were still a long way off, in addition, the effort involved was also comparatively modest.

Just 193 square feet and not many displays, but a lot of enthusiasm for the company's products and hope for better times ahead. This describes the “Optima-Maschinenfabrik” booth at the 1952 Achema trade show in Frankfurt.

At the forefront, Dr. Max Bühler, who had been the sole managing director and owner of Optima since his father's retirement from the company in 1945. Just like his employees, he welcomed interested parties to the booth, explained, advised, demonstrated – and knew how to persuade. The effort paid off. In the 1950s, consumption slowly picked up and Optima filling scales were in high demand.

Six successful years later, Optima was one of the first exhibitors at the newly launched Interpack trade show to display its quality filling scales to an ever-increasing international audience. Bag packaging machines for tea and coffee were also on display. In the same year, the company crossed the Alps to Milan for the Ipack-Ima trade show, and then moved on to Vienna, in the spring of 1959. The success story of Optima's trade show appearances continues.

Although the Optima trade show booths repeatedly set standards, surely no one at the time would have dreamed of what trade show visitors would see in the distant future.

Interpack 2017: Optima's trade show guests undoubtedly had high expectations, but not this – check-in staff at Optima's futuristic-looking booth led them directly aboard a space shuttle and asked them to fasten their seat belts. And for good reason, since the flight in the 4D simulator was fast-paced to say the least. At breathtaking speed, it traveled through the different galaxies of the broad Optima universe with up to 2g acceleration. Entire planets with new machines and systems could be marveled at, as well as future-orientated services. “Mission Total Care” truly expanded horizons.

The “OptiFly” became the center of attraction at Interpack: Over 800 trade show visitors embarked on the journey. This was validation for the whole Optima trade show team, who spared no effort to bring this experience to life. Most importantly, to all parties involved the OptiFly was much more than just a fancy trade show gimmick. After all, virtual worlds have long been indispensable at Optima and have become an integral part of our day-to-day work and a key element of Mission Total Care. Under the umbrella “Optima Total Care” a wide variety of services are provided to customers: targeted support throughout the entire life cycle of their systems, including state-of-the-art HMI technologies, software tools and sensor technology. The future has long since begun – and not just at trade shows.

1,340 hours of assembly and disassembly

Achema 2018. Futuristic, two-stories high, and surrounded by a large LED wall – this is how Optima Pharma presented itself at the leading trade show Achema in 2018. A presentation that made its mark, just like the novelties that awaited visitors. With the “MultiUse” concept, Optima Pharma demonstrated how companies can respond to small batch sizes and different container types. In doing so, it hit a nerve as the need for flexible filling systems and processes is driving the industry.

However, one topic in particular soon became the talk of the trade show: Comprehensive Scientific Process Engineering (CSPE) has the potential to revolutionize the digitized project planning, design, and implementation of pharmaceutical filling systems. By combining scientific methods and technological processes, the time from order to start of production can be significantly reduced – without compromising safety.

What will happen after the pandemic? The only certainty, digitalization has also found its way into trade shows. Whether webinars, seminars for experts, or virtual trade shows, there has been an increasing amount of online content and events since 2020. Will it continue? Probably not, because there is no substitute for personal contact. Nevertheless, these new possibilities have become indispensable and, in many cases, enable fast and effective exchanges. Therefore, it seems likely that hybrid forms of the virtual and real (trade show) spheres will emerge – just like in life.

Share experiences, learn from others, and gain valuable insight to develop new strategies. The Pharma Forum is an innovative event format conceived by Optima Pharma and has become a real industry magnet since its premiere in 2001. Every three years, an interested expert audience comes to Schwäbisch Hall to participate in a high-level program of lectures and discussions to learn of new trends and developments – as well as taking advantage of the opportunity to enjoy informative on-site tours. More than 200 participants from 25 countries attended the last Pharma Forum in 2019. Which goes to show that Optima doesn't just like to travel, it also makes a great host!

Side by side into the future